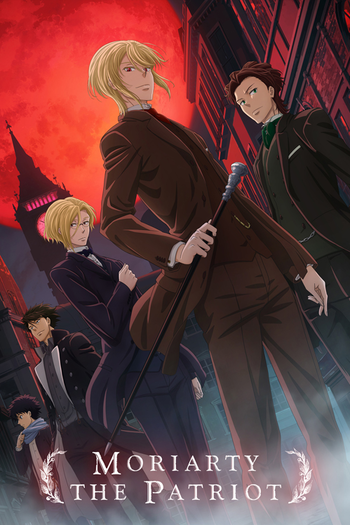 The Lord of Crimes at their work
"If the monsters of this world were to disappear, then people's hearts would be cleansed, thus removing the curse. And our country would surely become a beautiful one."
—William James Moriarty
Advertisement:

Moriarty the Patriot (originally titled 憂国のモリアーティ, or Yūkoku no Moriāti) is a loose retelling of the Sherlock Holmes stories featuring James Moriarty as the protagonist. Written by Ryōsuke Takeuchi, and illustrated by Hikaru Miyoshi, the manga has been serialized in Jump Square since 2016. Viz Media licensed the manga for English serialization.

Production I.G produced an anime adaptation of the series, which started airing in October of 2020. The second half of the anime began in April 2021. Funimation licensed the series for the North American distribution while Muse Communication distributed the series for Southeast Asia and South Asia.

The series has also been adapted into musicals and stage plays, which both adapt the series in multiple installments, and three light novels with various extra cases.

Moriarty the Patriot contains examples of: