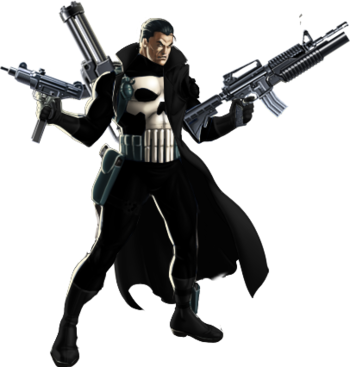 Complementing the Multi-Melee Master, the Multi-Ranged Master is a character who wields at least two distinct types of ranged weapons, ones which would require distinctly different techniques.

Wielding a rifle is very different to aiming a pistol, and the techniques for using heavy weapons like bazookas and grenade launchers are even more radically different. And as for those protagonists who use bows... or alien weapons. Basically, if a character carries two distinct types of ranged weapon, both of which would require a lot of practice to use without necessarily giving competence with the other, you have this trope.

May be a Walking Armory if the character doesn't have access to a Hyperspace Arsenal.

Aside from being a signature of the Crazy-Prepared, it marks a character as diligent, as well as well trained.

Sub-trope of Choice of Two Weapons.