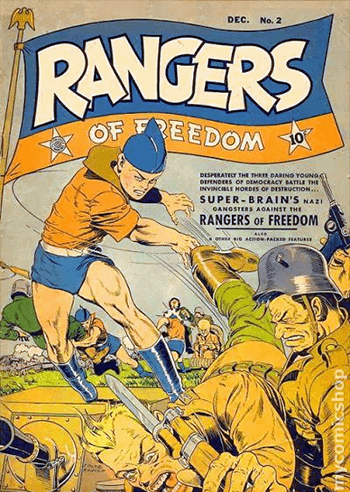 In fairness, Wehrmacht training probably doesn't cover short shorts-wearing teenagers throwing Hans at you.
"'Cause the eyes of a Ranger are upon you
Any wrong you do, he's gonna see
When you're in Texas, look behind you
'Cause that's where the Ranger's gonna be."
— Theme Song, Walker, Texas Ranger

So you have your Elite Redshirts. They go anywhere, fight anyone, and keep on trucking no matter how hard they're hit. They're on the good side, they're a group of (usually) non-main characters, and they are AWESOME. So... what do you call them?

It seems that, every time you hear the word "Ranger", the person/people bearing the title will proceed to kick butt for quite a long time, and will almost never suffer from Badass Decay.

In short, "Ranger" is shorthand for awesome. As can be seen from the Real Life folder, there's some Truth in Television to this.

When applied to military units (such as the US Army 75th Rangers Regiment), they will typically be some form of light infantry Spec-Ops who specialise in mobility, stealth and occasionally guerrilla/counter-guerrilla tactics. The accepted vulnerability in these tactics (reduced armor, firepower, numbers, etc) add to the badass credentials.

See also the Army Scout, who may be equally badass, but tends to work alone scouting ahead of the army. See also Forest Ranger.