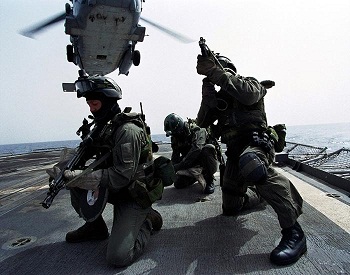 Somebody call for an exterminator?
"WANTED: Volunteers for Project DELTA. Will guarantee you a medal, a body bag, or both."
—Attributed to Colonel Charlie Beckwith, founder and first commander of Delta Force
Advertisement:

Within the realm of military fiction, there are few areas that carry the same fascination, mystique, and underwear-soiling badassery as special operations. Known collectively as Special Operations Forces in the United States and Special Forces or some other variation thereof in the rest of the world, they are the elite within the elite; the bogeymen creeping up to the bad guys' beds in the night to snatch them away and take them to some mysterious black site in the middle of nowhere. They are the sine qua non of my-country-could-beat-your-country debates. When writers need to quickly demonstrate that their protagonist is a stone-cold killer, they just name-drop one of these guys and they're good to go.

Then there are terms like "black operations", "clandestine operations", and "covert operations" that get used interchangeably with special operations but actually have very precise meanings. They overlap sometimes but there are subtle differences between the terms. Black operations are not only denied by the government that orders them, they go to great lengths to hide the fact that they were even involved, because these operations might be illegal under international law, incredibly embarrassing if found out, or for whatever other reason. Clandestine operations are secret too, but the emphasis is on hiding the fact that the operation took place rather than the agency that did it. Covert operations also put the emphasis on hiding who actually carried out the operation, but they generally don't involve kidnapping, assassination, and general dirty business. Special operations are missions that do not fall under the purview of normal military units and, unlike the previous terms, generally don't describe actions taken by non-military organizations. If we're talking about black ops, it is more likely that an intelligence agency was involved.

After a series of infamous high profile terrorist attacks during the Cold War, countries around the world began to recognize the importance of having compact, highly capable police or military units that could deal with high-risk situations that required immediate attention. As a result, special operations are not limited to those countries that have big, healthy defense budgets.

open/close all folders
The United States of America

The United States Special Operations Command was established by the Nunn-Cohen Act of 1987, and placed under the command of General James J. Lindsay. Operation Eagle Claw, a botched attempt to rescue US diplomatic personnel held in Iran after the Iranian Revolution, had cruelly exposed the unworkability of the current arrangement. Military reform because a prime issue in Congress, and over opposition from the Pentagon, USSOCOM was created, replacing the United States Readiness Command (USREDCOM), which had found itself without a real role. It has since gone from strength to strength. On a related note, many US Special Operators like to wear full (and very non-regulation) beards in the field, apparently because, being special operators, they can. Of course, a beard is often handy when dealing with Afghan tribesmen.

Each branch of the US Armed Forces (excluding the Coast Guard) has its own special operations command. These are subordinate to USSOCOM, which commands and coordinates the activities of the subordinate branches. They are described below:

Officially, JSOC is a "joint headquarters designed to study special operations requirements and techniques; ensure interoperability and equipment standardization; plan and conduct joint special operations exercises and training; and develop joint special operations tactics." This may even be true. However, there is a lot more to their operations than that. JSOC commands and controls the special mission units of USSOCOM. Since 9/11, their primary mission is to search for and destroy terror cells worldwide. They answer directly to the President, and their budget, which is almost certainly in the billions, is classified. JSOC also operates across borders in operations that officially do not exist. A shadowy bunch, they are also the crème de la crème of the US special operations community, and indeed, some of the deadliest special forces in the world. The conduct extensive work with the Central Intelligence Agency, and are known to have conducted operations in Pakistan, Yemen, Afghanistan, Iraq, and Iran (including kidnapping Iranian Revolutionary Guard officers) in support of the War on Terror.

Organized in the same style as USSOCOM, COS was established in 1992 following the Gulf War. French Special Forces are permanently under its command and ready for action. It reports directly to the President of France and is commanded by a one-star general. COS has operated in Afghanistan, Mali, Chad, French Guiana and beyond in support of the War on Terror, though it was notably absent from the Iraq War due to France's opposition to that fight. Despite France's wholly undeserved reputation, COS is regarded as one of the toughest units in modern SF, and is not to be fucked with under any circumstances. Like USSOCOM, it has subordinate commands:

Announced by Valery Gerasimov, Chief of the Russian General Staff, in April 2013, this unit is in the process of being formed. Watch this space. In the interim, the Russian Special Operations Forces can be analyzed in terms of their service branch. It should be noted that, like the USA, Russia has a huge number of units that could possibly fit the bill. Unlike the USA, the Russians tend to give them either a bland or Non-Indicative Name, as well as classifying most of the basic data about them. Be warned: here be guesswork.

A technically separate service branch from the Russian Ground Forces, the Russian VDV (Air Landing Forces) paratroops have their own Spetsnaz units. The Russian VDV enjoy a similar reputation to the USMC (except they are paratroopers and not marines), and their special forces are no exception.

The Russian Navy operates four "Independent Naval Reconnaissance Spetsnaz Points", one for each Fleet (Pacific, Northern, Black Sea, Baltic). It can be presumed that they have similar capabilities and missions to Western combat diver units. They usually operate together with Marines and their bases are attached to the respective Marine units, even though they are administrative independent.

The Russian Federal Security Service is tasked with the domestic security and stability of the Motherland. To this end, it maintains several elite military organizations, all of which have operated in combat around Chechnya.

The Russian Ministry of Internal Affairs (MVD) Internal Troops (reforged into the National Guard of Russia a.k.a. Росгвардия / Rosgvardiya in 2016) has a number of elite units dedicated to preventing insurgencies and mutinies within Russia. These are known as "special purpose detachments" and are in essence equivalent to SWAT teams, though likely with greater regional training to allow them to operate in the varied theaters of Russia, which is after all the world's largest nation.

The Special Forces of the Polish Republic are the 4th branch of the Polish Armed Forces. They have served with distinction throughout Operations Iraqi and Enduring Freedom. They trace their lineage from various pre-war formations, such as the winged Hussars, as well as the Armia Krajowa, the Home Army of Poles who resisted the Nazi occupation of the General Government.