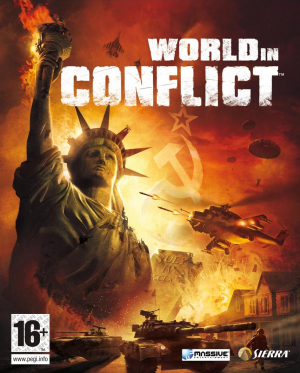 The war is coming home.
Advertisement:

World in Conflict is a 2007 Real Time Tactics game by Massive Entertainment. Set during the closing days of the Cold War, the game explores what might have happened had the Warsaw Pact countries decided to start World War III instead of allowing the gradual collapse of its constituent governments. Best described as Red Dawn (1984) meets Ground Control, the game eschews traditional RTS elements in favor of a more tactical approach: no base building occurs, units are air-dropped, and individual armies rarely number more than a dozen units.

The single-player campaign takes place in 1989. The Soviet Union, bankrupt and desperate, launches a surprise attack across its European borders, surprising the rest of the world. The conquest is at first a success, but as the months go by NATO rallies, and it becomes clear that the Soviets are overstretched and out of momentum, causing the conflict to settle into a stalemate. In a massive gamble, the Soviet Union smuggles several battalions into Seattle harbour on freight ships, counting on the fact that most U.S. troops are tied up overseas. The story is told through the eyes of a subordinate to the legendary Colonel Sawyer, Lieutenant Parker, as Sawyer's battalion fights a desperate war to contain the red menace.

World in Conflict is lauded for its multiplayer, which has the player assume a specific role in combat, commanding only a small, specialized force on the battlefield and working together with the other players to win. The matches are fast-paced and map types are strongly influenced by FPS games, with modes such as Dominationnote the teams try to hold more control points than their rivals for as long as possible or Assault.note The two teams take turns defending or assaulting the control points Since there are no resources to gather, the game is instead based around strategical control points that need to be captured.

An Expansion Pack was released in 2009, titled Soviet Assault. The expansion added six new missions interwoven into the existing campaign that covered the Soviet side of the story, as well as four multiplayer maps which were later released for free. The expansion pack received mixed reviews, with many praising the Soviet campaign but noting the lack of new gameplay features. Since then, later copies of the game, physical and digital, are the "Complete Edition" which features both the base game and the expansion.

The game was well-received both by critics and by consumers, with common praise being the then-impressive graphics, the compelling gameplay, the entertaining team-based multiplayer modes and a strong single-player campaign and narrative. Since the sale of Massive Entertainment to Ubisoft by then-publisher Activision the only thing to come out of the series has been the delayed and poorly-received Soviet Assault, and since Massive has since moved on to other projects, it is probably that World in Conflict has become an Orphaned Series.