Video Game / The World Ends with You 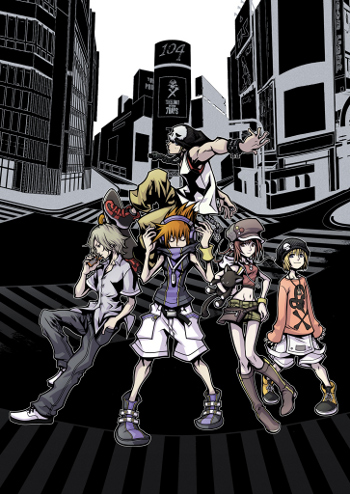 Don't hate the Players; hate the Game.note From left to right: Joshua, Neku, Shiki, and Rhyme, with Beat behind them.
"Listen up, Phones! The world ends with you. If you want to enjoy life, expand your world. You gotta push your horizons out as far as they'll go."
— Sanae Hanekoma
Advertisement:

Also known as It's a Wonderful World (Japanese: Subarashiki Kono Sekai), The World Ends with You is an Urban Fantasy Action RPG developed and published by Square Enix and co-developed by Jupiter (the same company that made Kingdom Hearts: Chain of Memories).

It tells the story of Neku Sakuraba, an asocial teen who wakes up one day on the crossroads of Shibuya, Tokyo with no clue how he got there. He soon discovers that he has been dumped into a Phantom Zone version of Shibuya called the "Underground", where he will be forced to play the week-long "Reapers' Game". Victory will allow Neku to recover his lost memories and escape from the Underground, but if he loses he'll be erased from existence.

The rules of the Reapers' Game dictate that it must be played in teams of two, and Neku is abruptly partnered with Shiki Misaki, a fashion-conscious chatterbox who becomes the first person to break into Neku's world. Other characters include Daisukenojo "Beat" Bito, a skater who fights before thinking and will take on anyone to finish the game; Raimu (aka "Rhyme"), Beat's logical and adage-loving partner; and Yoshiya "Joshua" Kiryu, a too-clever-by-half teenager who shares Neku's impatience when working with others. Armed with mysterious psychic powers linked to pin badges, the group fight to overcome the challenges set by the Reapers' Game and survive their seven days in the Underground. Opposing them are the organisers and moderators of the game, the Reapers themselves. The plot is a whirlwind of reveals and gambits, so much so that the game encourages you to play a second time to gather secret reports that will allow you to (possibly) make sense of it. Square Enix has also released a one-shot tie-in manga.

Battles are complex and fast-paced, with deep character customization systems and a large number of in-battle actions to choose from. These battles use all of the DS's unique features, and at higher difficulties not paying equal attention to both screens can be deadly, so the game is often noted for its difficulty and complexity. The soundtrack consists of modern, local acts from in and around the real-life Shibuya, and the graphics are inspired by Shibuya's fashion and trends, with character designs by Gen Kobayashi and Tetsuya Nomura. It has achieved a high level of critical acclaim, particularly for how different it is from its contemporaries.

An iOS port of the game subtitled Solo Remix was released on August 27, 2012. The port features enhanced graphics, new music including the remixes from Kingdom Hearts 3D: Dream Drop Distance, and online Tin-Pin. While no story changes were made, iOS devices could not support the two-screen combat style used in the original, creating a new combat system in which pairs fought together on screen. On October 12, 2018, a Nintendo Switch version subtitled Final Remix was released; in addition to being based on the previous Solo Remix in gameplay and design, the game features an extra scenario that expands the game's existing story, as well as a Sequel Hook.

There was also a social game subtitled Live Remix, set in an alternate universe. At the beginning of the week, players were assigned into groups of 20, and need to work together to defeat Ringleader Noise. There was no English release, however, and the Japanese game shut down on February 28, 2014.

In June 2020, thirteen years after the game originally released, an anime adaptation was announced at Anime Expo Lite 2020.

Kazuya Ichikawa will direct the series at Domerica x Shin-Ei Animation, with Midori Goto serving as screenwriter. Key staff members from the original game like Tetsuya Nomura & Gen Kobayashi (character design) and Takeharu Ishimoto (music) are also returning to those roles for the anime. The series began airing on April 9, 2021, and you can watch the reveal trailer here

In November 2020, a follow-up known as NEO: The World Ends with You was announced for a July 2021 release on Nintendo Switch, PlayStation 4 and PC. Taking place in Shibuya once more, the game follows a cast of new characters in a new version of the Reapers' Game, with appearances from classic characters like Sho Minamimoto and Koki Kariya. Graphically, the game makes the Video Game 3D Leap with cel shaded graphics vs. the original's 2D sprites.

Does not involve you bringing the world to some sort of "end".

Note: It's A Wonderful World is a dangerously similar title to that of a 1939 live-action Screwball Comedy, It's a Wonderful World, starring Jimmy Stewart and Claudette Colbert.

Example of:
Cycle of Hurting