Video Game / The Witch And The Hundred Knight 2 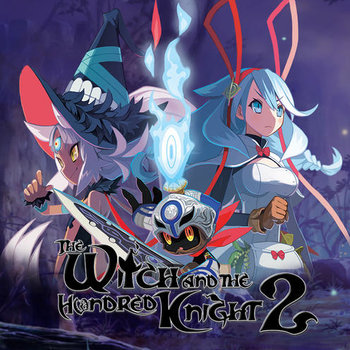 From left to right: Chelka, the Hundred Knight, Amalie
Advertisement:

The world of Kevala has been ravaged by a terrible disease known as the Witch Disease. Whenever women contract this disease, they gain a third eye on their forehead, immense magical abilities, and a lack of morality, using their powers to terrorize the countryside. When a young girl named Amalie finds out her sister Milm has the disease, she tries to join the anti-witch organization Weiss Ritter to find a cure. However, when Milm undergoes surgery to remove her third eye, her witch powers awaken, transforming her into the witch Chelka, who brings to life Milm's favorite Hundred Knight doll and vows to become the most powerful witch in the world. Now Amalie must find a way to rise in the ranks to find a cure for Milm while keeping Chelka out of trouble.

The player once again takes control of the Hundred Knight. The game is played from a top-down perspective and battles are fought in hack-and-slash style with some Roguelike elements mixed in. However, several changes have been made to the formula. The original game's stages have been replaced with a labyrinth-like overworld. As players progress through the game, different paths open up for those willing to explore. Many aspects of the original game, such as the Facets, have also been reworked and balanced.