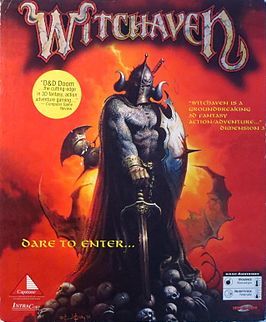 Witchaven was a 1995 Action RPG, developed by Capstone Software and published by IntraCorp.

Along with Capstone's 1994 release, William Shatner's Tekwar, it had the distinction of being one of the first games made on the Build Engine, debuting a full year before Duke Nukem 3D. Although based on a first-person shooter engine, the gameplay had more in common with traditional first-person fantasy hack-and-slash RPGs, with a heavy emphasis on close combat with melee weaponry (a bow and several magic spells for ranged attacks were also available, but each had limited uses). The player also gained experience points and increased his health and magic ability gradually as the game progressed.

The game follows the warrior Grondoval as he journeys to the forbidden land of Witchaven to defeat the evil witch Illwhyrin.

A sequel, Witchaven II: Blood Vengeance, was released in 1996, which featured new weapons and enemies - plus a significant Sequel Difficulty Spike. This was Capstone and IntraCorp's last game, before they both went bankrupt in the same year.