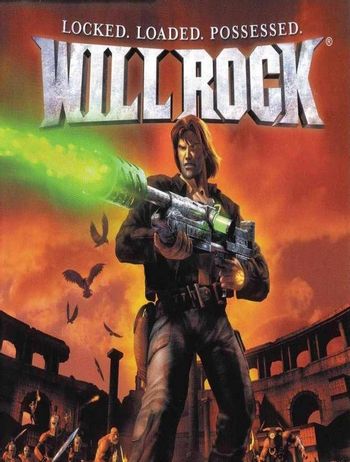 "Get Ready to Rock!"
Advertisement:

Long ago, Zeus and the other Greek gods ruled over Greece from Mount Olympus. After the Roman invasion, the servants of Zeus were sealed away for good.

Present: Willbert Rockwell (Will Rock for short) is visiting Greece with his archeologist girlfriend Emma and her father when they got kidnapped by the ORA (Olympian Restoration Army), a fanatical movement whose members want to restore the old gods and force the two archeologists to break the seal to Zeus' prison. The god and his army of monsters are freed, and the ORA bring Will's fiancée to Zeus in order to offer her as a bride and kill her father.

With the help of Prometheus and with a lot of guns, Will must make his way through armies of monsters, weirdoes and beasts in order to stop Zeus before he conquers the world.

The game itself is not really well known, but has often been compared to the Serious Sam series.