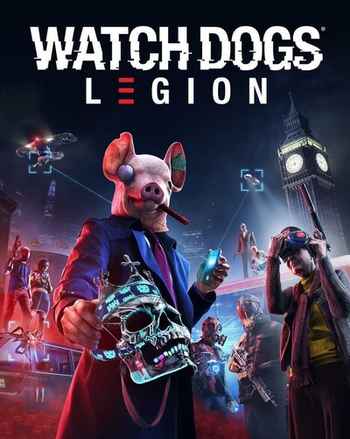 Watch Dogs: Legion is the third game in Ubisoft's Watch_Dogs series. The game offers a dystopian look at London 20 Minutes into the Future, where rising crime and terrorism have led to the city becoming an oppressive police state, ruled by Private Military Contractors and crawling with surveillance drones. In response, the hacker group DedSec seeks to bring freedom back to the city of London. In order to achieve this goal, they will need to recruit new members to join their ranks...

The main selling point of Watch Dogs: Legion is the ability to recruit new members into DedSec: the people of London are so opposed to the city's current direction that any of the civilian NPCs can be convinced to join your cause, turning them into playable characters each with their own set of skills and (positive and negative) perks: some ex-military have exceptional combat skills, some activists have hacking specializations, retired old grannies with heavy weapons are better at infiltration than you might think... and some characters will randomly drop dead of a heart attack.

The game was set for release on March 6, 2020 for Xbox One, PlayStation 4, PC, and Google Stadia. However, after the Ubisoft Forward 2020, it was postponed to October 29, 2020 for the aforementioned platforms and released for Xbox Series X|S and PlayStation 5 on the two systems respective launch dates.

Tropes A to M
Tropes N to Z
Bloodline