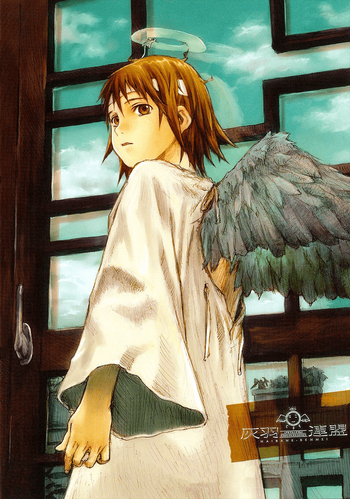 Angel? Nah.
Lina: How are your wings attached?
Serene: They just grow on my back.
Lina: They don't come off?
Serene: Do your arms come off?
— Riviera: The Promised Land
Advertisement:

Simply put, it's a human with wings sprouting from their back.

Biologically improbable due to human bone and muscle structure (though at the same time, usually easy to rationalize at first glance due to the nature of our shoulders), and if they're intended for actual flight, you may have to write off several laws of physics as well. Therefore, such characters are often assumed to be not entirely of this world, especially since the domain of birds shares a name with God's kingdom: Heaven. This ties into the classic depictions of winged angels as well.

The type of wing is usually indicative of the character's morality — see Good Wings, Evil Wings.

If there's something even slightly resembling feathers, expect a Perpetual Molt. Don't expect flapping, however there will be plenty of floating.

Best done via animation, as live-action wings are bulky and can look rather silly. Animated wings are also easier to "tuck away", or may even vanish into hammerspace. If a character suddenly sprouts a pair, it's because Power Gives You Wings.

Generally seen as highly attractive, even if the Wings Do Nothing. If you're looking for the flying partner of an Ace Pilot, try Wing Man.

Subtrope of Vertebrate with Extra Limbs and Monstrous Humanoid. See also Draconic Humanoid, who may have dragon wings but looks decidedly less human. Subtropes include Bird People (usually), The Mothman, and Harping on About Harpies. Compare Peacock Girl and Pegasus. May become a Broken Angel if their wings are clipped.

Hino-Enma have a pair of wings made of umbrella paper for flight.

Hino-Enma have a pair of wings made of umbrella paper for flight.