Wind from Beneath My Wings 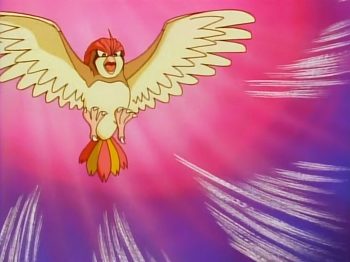 A Sub-Trope of Blow You Away, in which the character generates powerful wind currents by strongly flapping his or her wings like large fans in the desired direction. This form of wind manipulation is usually limited to powerful, directional gales, although generating other standard wind techniques (tornadoes, Razor Wind, etc.) with this method isn't unheard of. Characters who fly using propellers can perform similar maneuvers by pointing their rotors at their targets and spinning them very quickly (although they'll generally go for the Helicopter Blender, with all of its own kettle of worms).

This is another case of Artistic License – Physics; while it's true that flapping one's wings should create a noticeable gust (which is typically a central element of winged flight), that character usually should not be able to remain stationary, especially if already airborne. Unless the character is especially massive or firmly held in place, conservation of momentum says that the character should be pushed in the opposite direction to cancel out the air's newfound velocity (which is, again, typically a central element of winged flight). Given many writers' stances on physical laws of conservation, though, the fact that the characters don't fly backwards with each flap isn't very surprising.

This is a staple technique of the Giant Flyer and Winged Humanoid. Even characters with otherwise Stationary Wings will flap them to generate wind this way. If power gave the character wings, large, heavenly gales can be used to demonstrate just how powerful the character is.

During a temporary dragon switch, Astrid finds out that Monstrous Nightmares like Hookfang can create a blast of wind by flapping hard enough.

During a temporary dragon switch, Astrid finds out that Monstrous Nightmares like Hookfang can create a blast of wind by flapping hard enough.