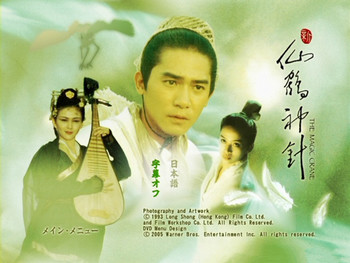 The Magic Crane is a 1993 Wuxia film starring Tony Leung Chiu-wai, Anita Mui (from Moon Warriors) and Rosamund Kwan (Once Upon a Time in China). It is loosely based on the novel of the same name by Wolong Sheng.

Ma Kwun-Mo (Tony Leung), a swordsman and initiate, had a fateful encounter with a mysterious beauty, Pak Wan-fai (Anita Mui) who rides a giant crane and plays a magical flute. Eager to discover more about her, Ma ends up being thrown into an epic martial arts battle involving Pak's estranged sister Butterfly who uses a magical killer pipa, poisonous vampire bats, a giant fire-breathing tortoise, an all-powerful warlord who wants to destroy the martial arts world, and an ancient bell which can grant its user lightning powers.

Notably one of Tony Leung's few ventures into the world of wuxia in the early 90s, besides Butterfly and Sword, Ashes of Time and the third A Chinese Ghost Story.