Film / Made in America 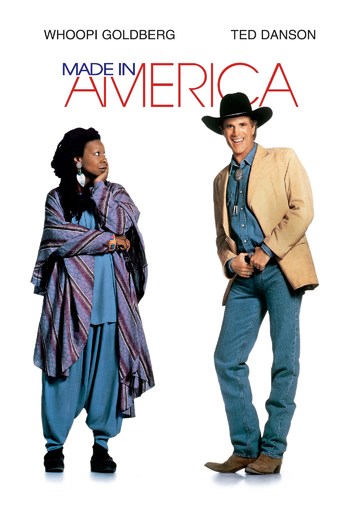 Made in America is a 1993 comedy film, starring Whoopi Goldberg, Ted Danson, Nia Long, Will Smith, and Jennifer Tilly. The film was directed by Richard Benjamin, previously known for such films as Downtown (1990) and Mermaids (1990).

Zora Mathews (Long) is a 17-year-old high-school student, working on getting a scholarship to the Massachusetts Institute of Technology (MIT). Sarah Grace Matthews (Goldberg), her mother, is the proud owner of the "African Queen" bookstore, a shop providing reading material to an African-American audience. Sarah is a widow of 17 years and Zora has never met her father. One day in school Zora and her best friend Tea Cake "T.C." Walters (Smith) are learning how to test blood for blood types. Zora learns that her blood type is AB. She immediately realizes something. Sarah's blood type is A, her dead husband's was O. Which means said dead husband was not her real father. (A mother with blood type A and father with blood type O, typically result in children with blood types A or O.)

Zora confronts her mother about it and learns the truth. She is the result of artificial insemination by donor. Which for Zora means one thing: her real father is somewhere out there. So she gets Sarah to give her the address of the sperm bank. Then visits the bank with Tea Cake. The boy serves as a donor, while the girl manages to locate an unsupervised computer. She checks out the files of the clinic and finds out the name of her father: Halbert Jackson.

Zora managed to locate said "dad" and contacts him in person. She gets the shock of her life as this happens to be Halbert "Hal" Jackson (Danson) of Jackson Motors. A well-known car salesman, famous for his outrageous television advertisements using trained animals. Hal is a womanizer, a chain-smoker, a booze-hound, a self-styled modern cowboy, and very much white. Very different from the father figure Zora had in mind. He is currently living with Stacy (Tilly), an aerobics teacher not known for her intellect. The newfound family ties between Zora, Sarah, and Hal result in much confusion in their lives.

Though this film did not fare well critically, it was a box-office hit, earning about $105 million in the worldwide market (about $45 million of which came from the United States market, where the film was the 30th most successful film of its year).