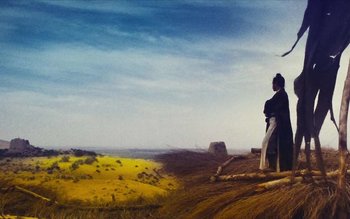 "When you cannot have something, the only thing you can do is to not forget."
— Ouyang-Feng

Ashes of Time is a 1994 Hong Kong Wuxia Martial Arts Movie written and directed by Wong Kar-wai, inspired by characters from Jin Yong's novel The Legend of the Condor Heroes.

Serving as a Prequel to the novel, the movie depicts a younger Ouyang-Feng (Leslie Cheung), the Western Venom, originally the antagonist of the novel, during his younger days as a broker for assassins and swordsmen. Characters from the novel, such as Huang Yaoshi, the Eastern Heretic (Tony Leung Ka-fai), Murong Yang / Murong Yin / Dugu Qiubai (Brigitte Lin) and Hong Qigong, the Northern Beggar (Jacky Cheung) makes an appearance, while at the same time a part of the story revolves around an entirely original character, the Blind Swordsman (Tony Leung), whose interactions with Feng serves as an inspiration to his eventual turn to darkness in the novel itself.

In 2008, 14 years after the movie's original debut, Wong Kar-wai re-edited and re-scored the film for a re-release. Simply titled Ashes of Time Redux, this is the version that's available to Western markets.

Ashes of Time presents examples of: