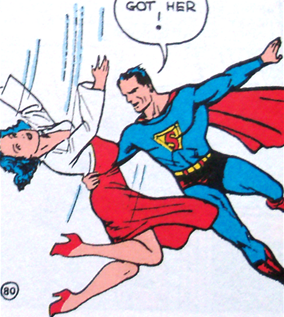 "You got me? Who's got you?"
"Take me to your house of shame
Easy on your body when you got no name
Hold me like you know me I'm a falling star
Catch me if you can
Show me the way inside."
— The Bee Gees, "House of Shame"
Advertisement:

There's a funny thing about heights in Action-Adventure stories: the range of heights which are fatal to fall from is surprisingly narrow. If you fall from too low, you naturally won't strike the ground with enough force to injure yourself; if you fall from too high, you're more likely to be rescued than to actually hit the ground.

Most often, the rescue comes from some sort of aircraft: The pilot dives sharply in pursuit of their falling friend, and either positions the craft underneath to catch them, in which case they land uninjured regardless of how fast they were falling, or else flies parallel to them, and someone pulls them back in by the wrist. (In the latter case, the diving craft will just barely pull out of the dive before smacking into the ground.) This can be accomplished even if you fell from that aircraft.

Alternatively, an individual with the superpower of Flight, or some kind of giant robot, or just a mean Building Swing may swoop in to catch you, possibly with the aid of Variable Terminal Velocity.

Physics says that this really shouldn't work, but you'll probably be too thankful that you're alive to care.

Compare Improbable Falling Save, where the catcher isn't moving and momentum seems to not transfer to them. Also compare with Take My Hand!. See also the Inevitable Waterfall and No OSHA Compliance for places to fall from. When what's being dramatically caught in mid-plummet isn't a person, it's a Desperate Object Catch. Sister trope to Saved by the Platform Below.