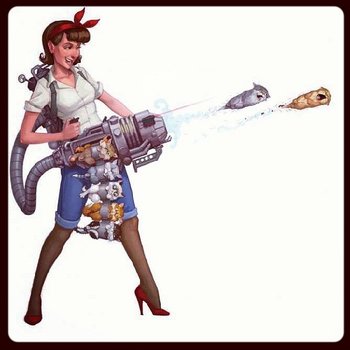 Cats Are Mean. Not only that, but they're also little balls of teeth and claws in a relatively small size, and a propensity to cling to objects, possibly while scratching it as best they can. And they tend to get very angry when handled roughly.
Advertisement:

All of this makes them a wonderful projectile weapon. Forget the Bee-Bee Gun, terrify your enemies with the Cat-apult!™

Expect to see Amusing Injuries in the form of tiny cuts to the face, where the cats will inevitably attach themselves. Variants include swinging a cat around like a melee weapon, or using a cat that can launch its own weapons.

A primarily comedic subtrope of Abnormal Ammo. Related to That Poor Cat. When an actual catapult is involved, it's usually a Visual Pun.

Fry defeats Zapp Brannigan and the Nimbus by catapulting a saber-toothed cat at them.

Fry defeats Zapp Brannigan and the Nimbus by catapulting a saber-toothed cat at them.