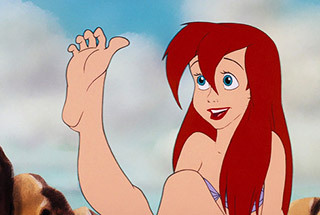 "Sand in the hair and sand-between-the-toes"
"Moved! The muscles tautening and relaxing, flex, extend, miraculous cells working their collective way to move great heavy bones and sacs of skin and organs, shift them balance them so delicately. The joy of it was too great. It erupted for her in — what was this convulsive spasming of her diaphragm? What was this gust of sound erupting from her throat? It was laughter. How long had she faked it with computer chips, simulated speech and laughter and never, never knew what it meant, how it felt. She never wanted to stop."
— Jane, Children of the Mind
Advertisement:

People don't always keep the same number or shape of limbs during a story — that'd surely be boring. So sometimes, a character ends up getting completely new limbs, possibly of a type they've never used before. They can also just get a temporary extension to their body; either way, it's a chance for them to explore new sensations and abilities.

This gives the creator a chance to show off their descriptive skills, explaining new things the character feels and how they're using their reshaped body. This page may contain spoilers if a character only gets new limbs or a different form at the end of the story.

The body parts can have been changed through someone shapeshifting, getting Artificial Limbs, being cursed, or just randomly Sprouting Ears. On occasion, the person has a whole new body instead, which may or may not be used for hilarity if they're naked. When downplayed, this trope is simply a character using their existing limbs in a new way or finding new sensations.

Truth in Television for people and animals who receive transplants and prosthetics.

Supertrope to Showing Off the New Body; see also Artificial Limbs, Voluntary Shapeshifting, and Sense Freak. How Do I Shot Web? is a variation to do with superpowers.