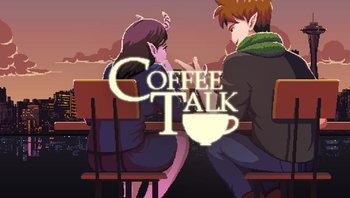 "But some few find solace in the embrace of bricks and wood and glass. They are told over drinks, then take up residence in some strangers' memories. In one corner of the city stands a coffee shop. A place that is only open when the sun is sleeping. A place where people share their stories. And these are their stories..."
—Opening narration
Advertisement:

The year is 2020, the city is Seattle. The great war is almost nothing but a distant memory, and each of the different races coexist among one another in relative peace. On a certain street corner stands a certain coffee shop that only opens when the sun goes down- the titular Coffee Talk. You are the owner and lone barista of that shop, and your job is to serve a hot drink and lend a listening ear to each of the customers who visit.

Coffee Talk is an indie game developed by Toge Productions,

a game studio based in Indonesia. The game mixes elements of Visual Novels with visual aesthetics inspired by 90s anime, classic pixel art adventure games, and the imagery associated with lo-fi chillhop music. Being a game about a coffee shop, the main game mechanic in Coffee Talk is naturally the drink-making feature, in which you try to serve each customer a drink made of three of the ingredients you have available. Over the course of two weeks you see several storylines play out through the conversations that take place within Coffee Talk, and whether you can fulfill each customer's order or not may affect what direction those stories take.

The game released on January 29, 2020 for the Nintendo Switch,

PlayStation 4, and Xbox One, with PC versions available through Steam

It also has a demo available on Steam