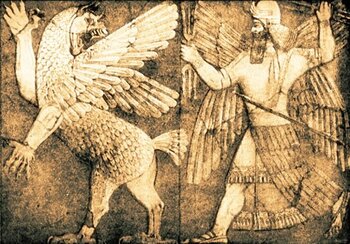 Enûma Eliš note That's not the title, by the way, since it doesn't have one per se. "Enûma Eliš" are the first two words of its first verse, which it is commonly known by; they translate to "When on High". is one of the oldest literary works on the planet, older even than The Iliad and The Bible. It is the Creation Myth of Mesopotamian Mythology and exists in several copies but most of them are from Babylon. Consequentially, a lot of the Babylonian copies serve as a hymn glorifying the patron deity of Babylon, Marduk; Assyrian copies, on the other hand, don't mention Marduk at all and attribute all his accomplishments to Ashur. It is likely that the original Sumerian text had either Ea/Enki or Enlil (who still figure in later copies) in the spotlight.

The book is a major source of Mesopotamian Monstrosities in modern works.