Fanfic / Ashes of the Past 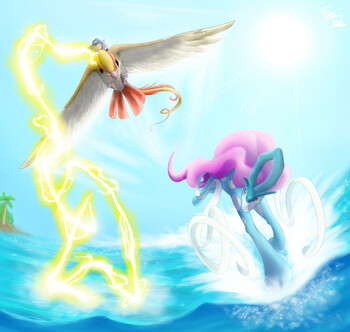 Art by foxyteah.
Ash: I want to go back to the day I met Pikachu — the day my journey began, when I first set off from Pallet.
Sir Aaron: Ha! Told you, you great lump.
Arceus: I thought 'any day but then' was good odds.
Ash: Wait... Were you two betting on me or something?
Sir Aaron: Err... Nooo?
Ash: Somehow I don't believe you.
Arceus: Now, Dialga!
Narration: In that second of absolute stillness, Ash thought to himself — using the, or a, legendary Pokémon capable of controlling time simply to avoid having to answer some awkward questions… that really took some beating. Then there was a roar, and he fell into blackness.
Advertisement:

Ashes of the Past is a Pokémon Peggy Sue Fan Fiction by Saphroneth, holding notable popularity within the Pokémon fandom. Posted on FanFiction.Net

Summary by the author: Time Travel, based on the Pokémon: The Series anime. So, the world ended. That's bad news. Who best to get to fix it? Well, there is this guy with a track record in world saving... Not entirely serious. T rating may be overdoing it.

Synopsis on Pokémon General: At some point during the Pokémon the Series: Black & White timeline note specifically during the Decolore Islands arc, after New Tork City, Cyrus succeeded in remaking the world in his image. Arceus did not like that very much, so he chose a champion to go back in time to Set Right What Once Went Wrong. Naturally, having already saved the world several times and having great potential with Aura, Ash Ketchum is that champion. After a week in a pocket dimension training to learn Aura, Ash is returned to the day he started his Pokémon Journey with the ability to restore his friends' memories of the other timeline and sets off to solve as many problems as possible before saving the world...and, of course, have fun on the way.