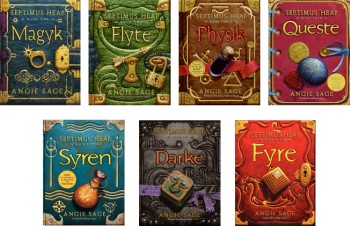 One unfortunate evening, an evil wizard and his underlings invade the Castle of a peaceful, unnamed nation. They murder the Queen and The Archmage of the Castle, the ExtraOrdinary Wizard of the time, Alther. On the same night, a family of Ordinary Wizards, the Heaps, down in the castle town awaits the birth of their seventh son, Septimus. His father, Silas, was also a seventh son, meaning that Septimus will have great power. But he is pronounced dead by the midwife and ferretted away. Instead, the Queen's newborn daughter is thrust into their arms for them to raise as her own. They name her Jenna, unaware that she's the Princess. But not for long; the Heap family must now protect their adopted daughter from the evil forces out searching for her.

Cut to ten years later — and now they've been found out. The Heap family is forced to flee their home to protect Jenna. Along the way, they pick up a quiet young soldier boy "named" Boy 412, who joins them in their hideout deep in the marshes. Just from the title of the series alone, you can probably guess who he really is. Overjoyed to have finally found his family, Septimus becomes an apprentice to the most (politically) powerful wizard in the world — and embarks on a slew of adventures with his sister Princess Jenna, his brother Nicko, best friend Beetle, and many, many others. But plenty of ills lurk in the world, wanting to get their hands on either his innate mystic power or his sister's political worth. Including one distressingly close to home...

The series consists of seven books, the final title having been published in April 2013:

An eBook novella, The Darke Toad, and a guidebook, The Magykal Papers, are also available.

A film for Magyk has been considered since 2007, but casting has not yet begun. In 2012, a major step forward was reported when Warner Bros. purchased the film rights to all seven titles in the series, including the final title, Fyre.

A Sequel Series, TodHunter Moon, began in 2014. The sequel series is set many years after the end of Fyre, and focuses on the adventures of a young female wizard. It consists of three books, PathFinder, SandRider and StarChaser, the last of these being described as "the magykal conclusion to the world of Septimus Heap."