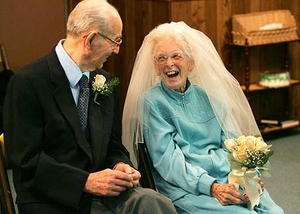 Amy: They're really perfect for each other.
Glenn: They are. They're both old.
Amy: Yeah, and there's, like, this whole duck thing, but mostly they're old.
— Superstore, "Valentine's Day"
Advertisement:

Romantic love that arises between two elderly or senior characters. May be depicted tragically in works where mortality or mental illness is a theme, but it can also be used optimistically, as proof that love and dating have no age limits.

Compare May–December Romance and Grow Old with Me. It often overlaps with New Old Flame, if the two characters were lovers earlier in life but got separated for some reason. It is the opposite of Puppy Love, in which two unusually young characters have a romance—although in the New Old Flame case, the same pair of characters may have been both. It can also serve as a case of Second Love.

It's definitely a case of Truth in Television, as many people do remarry or have long-term relationships that begin very late in life.