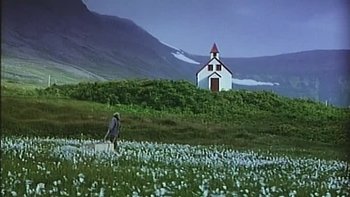 Children of Nature (Börn náttúrunnar) is a 1991 film from Iceland directed by Fridrik Thor Fridriksson.

Thorgeir is an elderly man living on a sheep farm. In his late seventies, it seems he can no longer look after his sheep. After shooting his dog, he makes an unannounced visit to Reykjavik and his daughter's apartment. But his daughter and her husband seem that thrilled about Thorgeir living with them, and his granddaughter throws a tantrum when Thorgeir takes some of the pictures down in her room.

So Thorgeir's family dumps him in an old folks' home. It is a pretty unpleasant one, being a glorified prison where the residents are confined to the grounds, limited to how much pocket money they can hold, and chucked into their rooms if they make too much of a fuss. One of the people who makes a lot of fuss is Stella, an old lady who turns out to be an old acquaintance of Thorgeir's; they both grew up in the same village in northern Iceland.

Stella loathes the home. Thorgeir, who seemed like he was going to resign himself to his fate, instead decides to run away with her. They steal a car parked across the street from the home, and go on what's basically a joyride across Iceland, headed to their hometown. Eventually, things start to get strange.