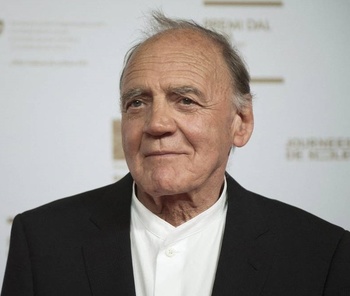 "I tend to identify with my roles to such an extent that I appear to be totally convinced about certain statements that, in real life, I would never believe in."
Advertisement:

He was one of the most prominent and revered figures in German language film, theatre and television for about fifty years (in Germany, Austria and Switzerland alike). He has received much critical acclaim and awards since the seventies, and has worked with renowned filmmakers such as Wim Wenders, Werner Herzog, Éric Rohmer, Théo Angelopoulos, Francis Ford Coppola and Ridley Scott, to name a few.

He had a great enough range as an actor to play both an angel (in Wings of Desire) and Adolf Hitler in Downfall (Der Untergang). The latter role was perhaps how he was best known to most contemporary audiences, and especially since his epic mental breakdowns in that film spawned the hugely memetic Hitler Rants Gag Sub videos.

He passed away from intestinal cancer on 16 February 2019, over a month shy of his 78th birthday.

Tropes and Trivia applying to his roles: