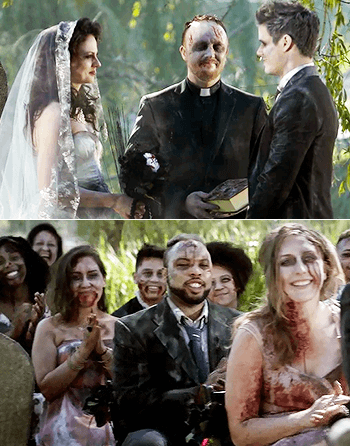 "We are gathered here today to mourn a great loss. Peggy, Edgar. Your single life is dead. [Crowd chuckles and applauds] But your life of wedded bliss is just beginning."
Emily: I know that in a million years, you would never let me plan your wedding. I gave up on that dream a long time ago. Yours was going to be a Russian winter theme. The Romanovs.
Lorelai: Before the firing squad, I assume?
Emily: Snow white roses, trees with white lights and candles, snow everywhere, you arriving in a silver sleigh with white horses.
Lorelai: Wow.
— Gilmore Girls
Advertisement:

"Dearly beloved, we are gathered here today to together through this thing called life. Electric word life it means forever an-- wait, that can't be right... it is? Oh yeah, I forgot this was the Prince-themed wedding. That explains why the bridesmaids are dressed like Maya and Nandy. "

Some people prefer to forgo the old ways in favor of something whimsical. It depends on those that marry, their friends and family, where the wedding will be held, when the wedding will be held, etc. Sometimes the bride will wear something out of the norm. Maybe a British couple goes to America for a wedding where everybody is dressed like cowboys and eat cake made of corn-dodgers and Ranch Style beans, or an Alaskan lesbian couple dresses like aliens and astronauts for a wedding in the Seattle Space Needle. Or maybe a polyamorous group of twenty strips naked and are married off by a clown priest in Pleasant Valley. Wacky, wacky!

Contrast with Wedding Smashers, where the whimsy and hijinks are unintentional and usually grinds everything to a halt.