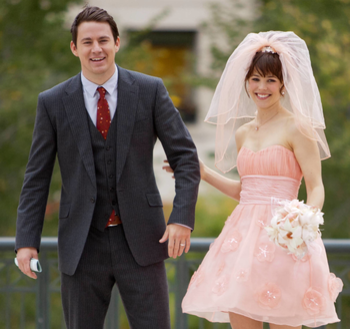 When it comes to weddings, everyone will expect the arrival of the bride all dressed in white. Whether in a straight, a lesbian, or a gay marriage, the image of a bride's white dress is so prevalent, and media will also often incorporate it with such.

But she's wearing something else other than white, not even off-white, and not even a hint of pastel. She's even wearing the same color as her bridesmaids. Everyone stares at her for her choice for the occasion. Both the bride and groom don't care; it's their mutual love, commitment, and trust that matters, not the outward appearances and judging eyes.

Factors can include time and financial restraints, as it may take several months and thousands of dollars to make depending on the embellishment for a dress that can be worn only once. The situation could take place on a Wartime Wedding. It can also be where a Themed Wedding may take part where a dress may be impractical for the theme. It may also be the bride's choice to break tradition and to wear any style and color they want, even black. And it may be where the bride is on a second or third marriage or so.

Of course, the tradition of the white wedding dress is a relatively new tradition, with brides during the early 19th century starting to wear white dresses, with white being a symbol of Conspicuous Consumption as white dresses were expensive and difficult to clean, and Queen Victoria popularized and solidified it after marrying Prince Albert in 1840 as a symbol of purity and elegance in simplicity.

Prior to 1840, brides would have worn their best dress in whatever of color, save for black, and they would have worn them again for several occasions. The most popular and ideal color was blue due to being a feminine color, and this is where the "something blue" part came from Old, New, Borrowed and Blue.

In India and China, red is an ideal bridal color as it symbolizes love. The unconventional part for an Indian bride or a Chinese bride would be to wear the Western white, as white for those cultures are reserved for mourning. Brides with a Patriotic Fervor would wear a dress based on their national clothing. And the more modern thinking bride would wear either very short skirts or even pants, or anything that would be inappropriate even for outdoor weddings.

Contrast Virgin in a White Dress and Fairytale Wedding Dress.