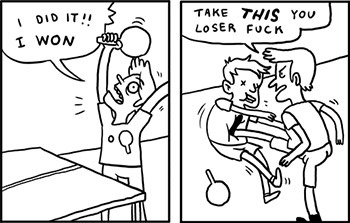 "Yes! We have defeated you for all time! You will never rise from the ashes of your shame and humiliation!... Well, that was fun."
— Azula, after a game of volleyball, in Avatar: The Last Airbender
Advertisement:

Most games end with a winner and a loser. Everyone likes to win and no one likes to lose, so there's a code of conduct (written or unwritten) that says both parties need to be gracious about the outcome. Losers shouldn't rant and rave; winners shouldn't dance and gloat. It's just unsportsmanlike (even if it doesn't involve sports) to defeat someone and then pile on the humiliation afterward.

This character has never read the code of conduct. Whether she's being subtly rude about it, or outright shouting "Loser! Loser! Nya, nya, nya!", Alice sees no need to be a gracious winner. She won, so why shouldn't she enjoy the moment? Who cares if her defeated foes think she's an utter Jerkass? They're probably just jealous anyway. (She rarely plays the same opponent twice.)

Often seen when The Rival is a Smug Snake, Jerk Jock and/or an Arrogant Kung-Fu Guy.

Note that this is not just wanting to crush your enemies and hear the lamentations of their women. This is strictly for when Alice wins and proceeds to be insufferable about it. Although doing those things just after you win does count. Somewhat common among siblings if Sibling Rivalry is involved.

Needless to say, this is a very bad habit to get into in Real Life. People can and have been disqualified from contests and tournaments for taunting and humiliating their opponents. Not to mention it'll pretty much guarantee that your friends will never want to play anything with you anymore. In team sports, it can mean you losing your respect among your teammates, or worse, getting kicked off the team altogether. Moreover, gloating and making insulting remarks after a victory may end up being Fisticuff-Provoking Comments if your opponent lacks self-control.

A Sister Trope to Sore Loser, and they are often the same character because the more gloating and ungracious a character is in victory, the more sulky and ungracious they'll be in defeat. Ironically, Unsportsmanlike Gloating can also make a Sore Loser (if they're different people in question) look sympathetic In-Universe and out.

Compare Evil Gloating, Cherry Tapping, Second Place Is for Losers, Taunt Button, Kick Them While They Are Down. Contrast Graceful Loser.

Peter Rosenberg appears on the Michael Kay Show to gloat about winning the 24/7 Championship from R-Truth.

Peter Rosenberg appears on the Michael Kay Show to gloat about winning the 24/7 Championship from R-Truth.