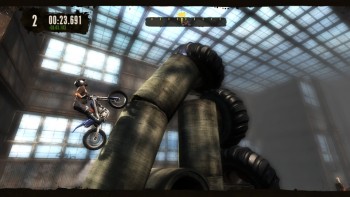 How hard can it be?
Trials is a series of videogames made by Finnish company RedLynx based on the sport of, well, trial. Your goal is to ride your bike from point A to point B in a 2D track, which is everything but plain and straight. Has several releases:
Advertisement:
The games used to be published by Xbox Game Studios, but ever since Fusion, they've instead been published by Ubisoft.

Tropes that appear in these games: