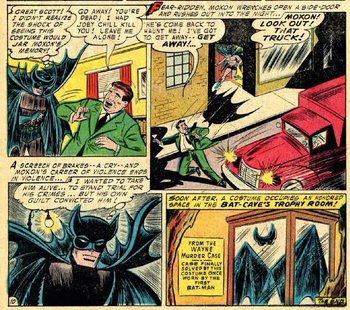 "Boy, it's been a long time since I've seen him in that yellow. The red and yellow is back!"
— Bobby Heenan (about Hulk Hogan), WCW Monday Nitro, August 9, 1999
Advertisement:

Perhaps your duds were torn to shreds in the latest showdown with your archnemesis. Perhaps, due to a personal crisis, you just aren't feeling like the classic red and blue. Perhaps you got stupid and put your bright red costume in with the whites. Whatever the reason may be, your Iconic Outfit isn't quite handy right now.

Fortunately, you've got a few old rags lying around...

This trope is for when, whatever the reason, a character opts to wear a little something from yesteryear. While it commonly overlaps with other costume tropes, the most common reason for this particular trope to occur is simple nostalgia rather than a Good / Evil Costume Switch.

Requires Costume Evolution to have occurred. The throwback costume may be a Beta Outfit. See also Still Wearing the Old Colors, as well as Cheap Costume when the character needs an outfit in a hurry and doesn't have an old costume handy.