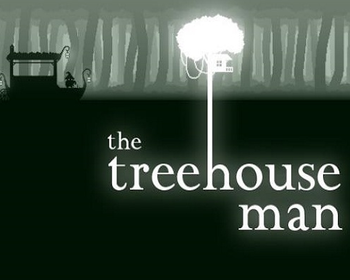 The Treehouse Man is a Role-Playing Game / Platform Game hybrid, developed by the Finnish Hunchback Studios and released for PC through Steam on the 13th of February, 2019.

It is about an unnamed player character who wakes up in the dark forest and is welcomed by their few surviving brothers and sisters as "The Last Captain", destined to pilot the last hallowed ship they have through the river in order to reach the World Tree, and seek an audience with the titular deity who lives at its top, as they believe this is the only way to be saved from the monsters overtaking the forest.

Like their previous game, Gloom, it is an (almost) entirely black and white game with dark storytelling. But whereas Gloom tried to adapt the gameplay of Dark Souls to the Side View 2D and the Roguelike structure of The Binding of Isaac, The Treehouse Man is more of a cross between Undertale and an (easier) Darkest Dungeon, as it has the Turn-Based Combat with real-time dodging during the enemy's turn of the former, while each stretch of a river acts as a mini-dungeon like in the latter.

Tropes present in The Treehouse Man: