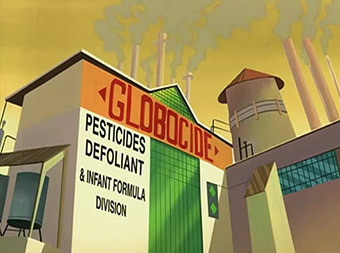 Sorry, what was that last one?
Lenny: What do they do with these [barrels of nuclear waste] after we seal them?
Karl: I hear they dump them in an abandoned chalk mine and cover them in cement.
Lenny: I hear they send them to one of those southern states where the governor's a crook.
Karl: Either way I'm sleeping good tonight!
— The Simpsons
Advertisement:

In many Green Aesop shows, it seems like the big corporations just want to ruin the environment. This trope applies to every fictional company that causes pollution to extreme levels. It of course applies to companies owned by people fully aware of what they're doing and who keep going anyway. Sometimes, what they sell isn't even known; at other times, we know what they're producing, and it could be an aggravating factor, depending on the product.

Sometimes, the owner of the company is barely aware of all the destruction caused by the enterprise. It might come off as a surprise, or be discovered by that owner in a dramatic manner. The fact that this person was unaware of the full extent of environmental damage makes the situation even worse.

Other times, the owner is aware. The owner of such a company is usually rich, so that he can hire villains to get rid of the heroes, or pull himself out of any lawsuit thrown at him with his Amoral Attorney.

Contrast Muck Monster, a creature of living pollution that may very well result from Evil, Inc.'s activities. If the enterprise is also a factory (and it most likely is), it can also be dangerous for the workers. Such enterprises usually appear in and heavily contribute to Crapsack Worlds. These can become Anvilicious due to the strong relation to Green Aesops. Again, those enterprises don't necessarily pollute the environment and might instead damage the ecosystem of a part of the world. It doesn't have to be in a Green Aesop-centered work of fiction, either. In video games, it's a common setup for an Eternal Engine level.

Compare Evil, Inc., which may overlap with this one. Contrast Greenwashed Villainy, where a corporation still pollutes but pretends that they don't.

An evil conglomerate that seems to exist for the sole purpose of destroying the world with pollution.

An evil conglomerate that seems to exist for the sole purpose of destroying the world with pollution.