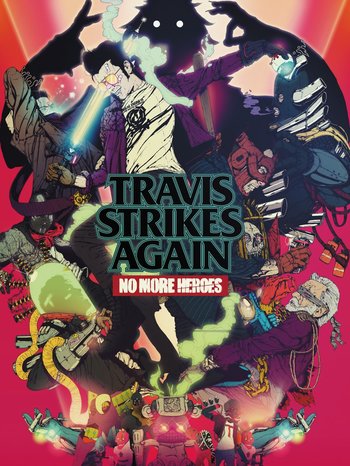 Time to beat the Death Drive.
Travis Touchdown: Hold it! I've been away a long time. There's a new generation of gamers out there! Let me at least introduce myself—
Bad Man: TRAVIS TOUCHDOWN! You murdered my daughter! Don't pretend you've forgotten!
Travis: Now quit making this shit confusing! They need to know about the most badass assassin in video games!
Bad Man: You BASTARD!!! Quit trying to butter up the gamers! Your fight is here in the real world! SON OF A BITCH!!!
Advertisement:

Travis Strikes Again: No More Heroes is the third entry of the No More Heroes series, developed by Grasshopper Manufacture as usual and released on the Nintendo Switch on January 18, 2019, with ports for Playstation 4 and PC via Steam coming at a later date. Notably, it is being directed by Suda51, whose last directed game was the original No More Heroes over 10 years prior, and includes collaborations with various indie developers in the form of licensed in-game T-shirts. Despite taking place and continuing the story after the first two games, Travis Strikes Again is not No More Heroes III, and is instead a smaller-scale game that tells a somewhat different story.

Seven years after the events of Desperate Struggle, a ghost from the past returns to hunt down retired assassin Travis Touchdown: Bad Man, the bat-toting, beer-chugging father of Bad Girl, who's out for a personal vendetta against Travis for murdering his daughter. Tracking down Travis to an RV in the middle of nowhere, Texas, he attempts to kill him, but Travis gets the one-up on him and the two clash. In the midst of the fight, a mysterious "phantom" game console known as the "Death Drive Mk. II" in Travis' possession activates, transporting the two of them within. According to an urban legend, collecting (and beating) the console's six games, stored in eye-shaped cartridges called "death balls," will grant the owner a wish, enticing Bad Man to attempt to complete Travis' collection with him (and play through the games in the virtual world of the console) to use that wish to bring Bad Girl back to life.

The game is divided between the Death Drive games themselves, which play out as action gameplay with optional co-op, and adventure-game Visual Novel type chapters which show how Travis and Jeane acquire the Death Balls in the real world.