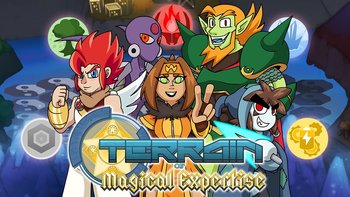 A Game About a Game.
"How would you two officially like to become members... of the Dandy Alliance?"
—Flamegirl
Advertisement:

The Terrain of Magical Expertise video game is a Role-Playing Game adaptation of the webseries of the same name. Featuring a Turn-Based Combat system inspired by the likes of Super Mario RPG, it is the logical conclusion to a series set within a game world (though it is not an MMORPG like in the webseries; it is a simulated one instead, inspired by the .hack video games).

Set entirely in its own canon, the TOME Video Game features different versions of characters from the web show, as well as a "White-Hat Hacker" Canon Foreigner Player Character that joins them. It was successfully funded

on Kickstarter in October 2017.

The Player Character is a White Hat Hacker asked by a colleague to help them bring down a large number of malicious hackers using their talents to cheat in the MMORPG TOME. The reason for so much rampant cheating stems from the current event in TOME, the Contest of Champions, which offers a cash prize up to $28,000. Upon logging into TOME for the first time, the hacker meets fellow new player Alpha as he is invited to play by his friend Kirbopher, which eventually leads to the Hacker joining the Dandy Alliance as they compete for the prize money while working to fight the hackers in secret.

Chris Niosi has confirmed this will be the final incarnation of the TOME story ever produced, as he wants to move on from the TOME IP and work on other ideas. This marks the End of an Era that started in 2004, as Niosi has not worked on any other entirely original projects since the original TVTome Adventures series began.note Except for his brief thesis film produced for the NY School of Visual Arts, Balancing Act. Originally set to be released in 2020, the year it takes place, the game was pushed back by a year in order to ensure that it would be as good as it could possibly be.

On December 21st, 2020, it was announced that the game had reached its alpha build.

before it was finally released on September 9th, 2021. The game was released with Russian and Chinese language options pre-installed.

Not to be confused with Tales of Maj'Eyal, which has the same acronym, or TOEM, an adventure/puzzle game.

Spoilers below for both Web Series! You have been warned.