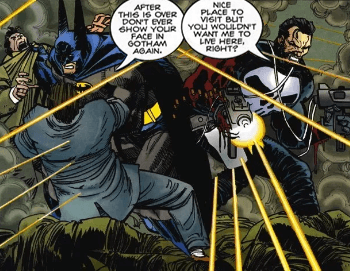 Sometimes in Real Life, people on the same side don't get along. In fiction, this often occurs when there are multiple villains trying to work together, a mismatched team of heroes, or a situation where former enemies have to team up. The problem with this sort of team is that they have trouble using The Power of Friendship or The Power of Love to win–likely because this is essentially the more cynical version of those tropes. It's still not at the far cynical end of the Sliding Scale of Idealism Versus Cynicism, however, because it still assumes that people can (and should) at least work together.

Generally, the imperfect teamwork generated serves as both a good source of drama and/or comedy, depending on the situation. It's particularly dramatic if the group undergoes a period of Divided We Fall first. It also helps ensure that the group is interesting and varied without raising questions of why they work so perfectly together.

This dysfunctional teamwork often takes the form of Family Drama (in cases where the team includes at least part of a Dysfunctional Family). The touchstone of enmity is family, after all.

The Leader may often find himself demanding an Ordered Apology.

Compare with Fighting the Lancer, where animosity between teammates actually does lead to a fight, Headbutting Heroes, where the heroes are not necessarily working together, and Can't Default to Murder, where a hero has to force his villainous teammate not to kill.

Contrast Sour Supporter, who is convinced that the team is doomed to failure, but works well with them anyway. If the series goes on long enough (and becomes less cynical), with enough Aw, Look! They Really Do Love Each Other moments, this might turn into The Power of Friendship or The Power of Love. Conversely, this trope is a good counterpoint to True Companions; it is a way of introducing some conflict and authenticity into works that would otherwise be too sugary.

Contrast We ARE Struggling Together, and A House Divided where there's lots of infighting on the same side but no teamwork. An Enemy Mine and Colliding Criminal Conspiracies usually results in this trope. Chained Heat is a more specific version of this trope involving being forced to work with someone by some method of a physical attachment. Frequently a by-product of Jurisdiction Friction. Family Drama usually has this within a family. Not to be confused with teams whose members always clench their teeth, or with pronounced determination shared within a group. Red Oni, Blue Oni and Vitriolic Best Buds are duos rather than teams, but they usually display this trope. May end up as an Inevitable Mutual Betrayal.

If they really don’t like each other, than usually one side or the other will give them an Implied Death Threat, and depending on who reaches their goals first, they will proceed to carry out a You Have Outlived Your Usefulness.

Often, this is how Fire-Forged Friends start out. Also compare with Forced into Evil.