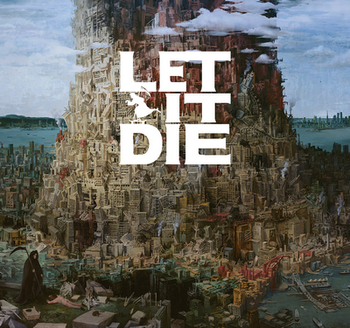 What's your Death wish?
"It's probably the greatest game ever made! The goal of the game is pretty simple: just make it to the top of the Tower of Barbs! It's like a hack-and-slash roguelike kind of a thing. Hey, dude! You're a gamer, aren't you? Then you'll be totally fine! Just try it out..."
— Uncle Death
Advertisement:

An always-online, free-to-play Hack and Slash Action RPG developed by Grasshopper Manufacture and published by GungHo Online Entertainment, directed by Hideyuki Shin (Killer is Dead). The game was released for the PlayStation 4 in December 3, 2016. The game would later receive a release on PC in September 26, 2018.

Taking advantage of the online resources available as of their acquisition by GungHo, it is an action game in which dead players will be turned into enemies in other players' games. It was originally announced as Lily Bergamo, which had a more anime-like art style. The devs have been quiet on details regarding that version of the game, but apparently the gameplay ideas were the same. After touting a tentative 2016 release date since October 2015, the game was unexpectedly released during the 2016 PlayStation Experience event on December 3rd. The gameplay and story are similar to Konami's Rengoku series on the PSP platform, both featuring highly customizable protagonists blasting upwards in a gigantic procedurally generated maze.

In any case, you are... well, you. And not only do you find yourself in your undies, you also realize that you're trapped in the post-apocalyptic remains of Tokyo - transformed into the "Tower of Barbs" - fighting for your life against horrific mutants who really want to kill you. Or at least, that's what it seems. Actually, you're just in an arcade, where you learn about a large tectonic disturbance that occurred in the year 2026 AD, causing mass destruction around the world. The south western side of Tokyo split off into the ocean, and became an island covered by a deep fog, becoming what is now known as the Tower of Barbs.

Anyway, you're playing Let It Die, said to be the greatest game on the bizarre console known as the "Death Drive 128." To make matters even stranger than they already are, you are playing it with the Grim Reaper, or rather "Uncle Death" as he calls himself. He calls you "senpai" and inexplicably looks up to you. What's more, he also exists within the game, where he runs a service called "Uncle Prime." Still with us? Okay, because there's also a young woman named Kiwako Seto, who is bizarrely perky considering she works with Direct Hell Insurance, an insurance claim that can give you perks and the chance to get back into the game should you meet an untimely demise (and you will have several demises).

In any case, the Tower of Barbs holds many secrets within. Some even say there's a treasure for anyone who somehow manages to climb their way to the top. Suffice it to say, something screwy is going on here, and if anyone is going to make sense of anything, it might as well be you, right? Besides, it's all just a game. What could happen?

In a departure from most major Grasshopper games since No More Heroes, the gameplay is more slow-paced, resembling Dark Souls. Here's its first trailer

and its cinematic trailer.

A sequel, Deathverse: Let it Die, was announced on October 2021.

Let it Die provides examples of: