The criminal of legend awakens. 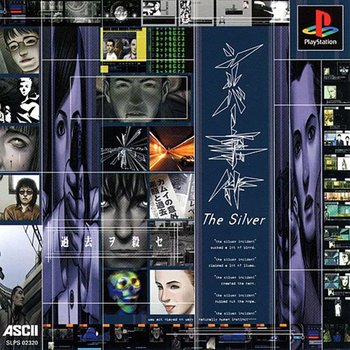 Confused or unsettled by this cover? Good, 'cause so are we.
Advertisement:

The Silver Case is the first game ever developed by Grasshopper Manufacture, written and directed by Suda Goichi (before the handle SUDA51) for the original PlayStation in 1999. A text-heavy adventure game, it follows the detectives of the fictional city of "Ward 24" in Japan as they hunt down Kamui Uehara, a serial killer who has murdered various political figures before, but was caught long ago by one of the detectives. Highly experimental, The Silver Case makes use of as many visual mediums as possible, putting 3D environments, 2D stills, live-action-videos and even animated clips together to tell its story. The game alternates chapters between two storylines: Transmitter, which focuses on the detectives of the Heinous Crimes Unit; and Placebo, which focuses on a freelance reporter.

While a Cult Classic in Japan that stands proudly among Suda's other dark, psychological early works, it did not make it overseas for the longest time. After years of trying (and one failed attempt to port it to the Nintendo DS), Suda finally got a chance to get it localized with a faithful multi-language PC remake released in October 2016, and a PS4 port in April 2017. You can watch the promotional video here

Following some patches, the remake contains two new chapters that serve as Sequel Hooks. The remake for one of these sequels, The 25th Ward: The Silver Case, was announced in mid-2017 for release in 2018.

Part of Suda51's "Kill the Past" Thematic Series/Shared Universe, along with the tragically Japan-exclusive Moonlight Syndrome and, most notably, Stealth Sequel Flower, Sun and Rain, killer7, and the direct sequel The 25th Ward.

(A colored moon appears)
THE SILVER CASE
The 25th Ward IS COMING SOON..
Kill the past
F I L M
WINDOW