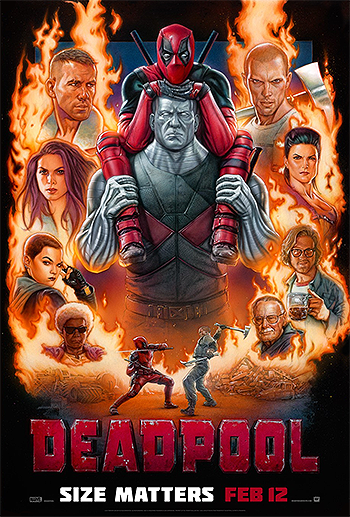 With great power, comes great irresponsibility.
"You're probably thinking, 'My boyfriend said this was a superhero movie, but that guy in the red suit just turned that other guy into a fucking kebab.' Well, I may be super, but I'm no hero. And yeah, technically, this is a murder. But some of the best love stories start with a murder. And that's exactly what this is: A love story. And to tell it right... I gotta take you back to long before I squeezed this ass into red spandex."
— The Merc with a Mouth
Advertisement:

Deadpool is a 2016 superhero comedy film based on the Marvel Comics character Deadpool, directed by Tim Miller, in his directorial debut. As with all other 20th Century Fox comic book movies, this film is not part of the Marvel Cinematic Universe. It does, however, have ties to the X-Men Film Series.

Its story revolves around former Special Forces operative Wade Wilson, who, after having his skin disfigured by a rogue experiment designed to give him a Healing Factor, decides to get revenge for his torture and hideous disfigurement as the Heroic Comedic Sociopath mercenary Deadpool. However, when he discovers that his Old Flame is the target of his sworn nemesis, Wilson decides to give this hero thing the old college try.

As promised in the first film's Stinger, there is a sequel introducing Cable to the franchise, 2018's Deadpool 2, directed by David Leitch (John Wick, Atomic Blonde). See also Deadpool: No Good Deed, a short film that was screened alongside Logan. A third film is currently in development with Shawn Levy (Reynolds' director on the films Free Guy and The Adam Project) in talks to direct.

In July 2022, this movie, along with Deadpool 2 and Logan, became the first R-rated films to stream on Disney+ in the United States.

open/close all folders
Tropes A to D
Tropes E to Q
Tropes R to Z
"Oh, and don't leave your garbage all lying around. It's a total dick move. Go. Chicka chickaaa!"
Feedback