Deadpool is probably the best known example of Heroic Comedic Sociopath in the comics, and that aspect gloriously translated to the big screen. 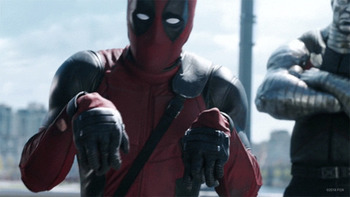 "All the dinosaurs feared the T-Rex."
Advertisement:
open/close all folders
The film
Wade Wilson/Deadpool

Trailers/Meta
It's very obvious just from looking that Ryan Reynolds had the time of his life with this movie.