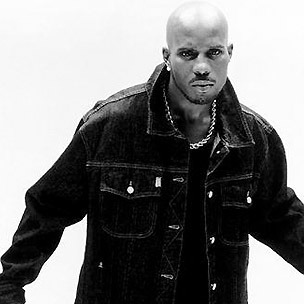 "Musicians often put on an exaggerated persona when on stage to make themselves seem more legitimate to the audience. Whether it's bragging about the number of women they lay or the fineness of the Maseratis they drive, this kind of casual exaggeration is perhaps most common in hip-hop artists.

DMX, on the other hand, is not in any way exaggerating when he describes being a bad, bad man in his songs."
—Cracked.com, "The 7 Most Impossible Rock Stars To Deal With

Earl Simmons (December 18, 1970 - April 9, 2021), more widely known by his stage name DMX, was a rapper and actor from Yonkers, New York. The name DMX was originally not an acronym, but simply part of a name taken from a popular drum machine of The '90s, the Oberheim DMX. However, in some of his pre-Ruff Ryders recordings, it stood for "Divine Master of the Unknown", as adapted from the Supreme Alphabet

of the Five Percent Nation

, before Simmons eventually settled on what would become the most famous version of the acronym: "Dark Man X," with X retaining its "unknown" meaning.

DMX was widely known for his harsh, gravelly voice, the frequent call-and-response lyrics used in his songs, and his extremely violent subject matter. His early life was extremely painful, with abusive parents, and a drug addiction starting from age 14 that haunted him all his life. The addiction began when he was tricked into smoking crack by his older musical mentor.

His songs attracted controversy for their constant Cluster F-Bombs and N-Word Privileges, rampant sexism and homophobia note  The heavy homophobia in many of his early songs did not prevent him from willingly performing at an LGBT nightclub

, and his extensive arrest record. He fathered a record fifteen children from nine different women. He had no problems feuding or dissing other rappers publicly, especially Drake. He became famous for not hiding any of these controversies from the public, and openly airing and even talking about them.

Yet at the same time, DMX was revered as one of the greatest rappers in the genre's history for his ability to put his personal pain into song. Him not hiding his 'dark side' from the public led to many admiring him for his honesty and being unafraid of the media. He performed regular charity work. He was celebrated for refusing to leave his New York street roots, always emphasizing them in song, and rarely surrounding himself with jewelry and fine clothes.

Despite the gritty themes of his songs, DMX was a devout Christian all his life. He mixed in spiritual themes of redemption, hope, and love as much as he put violence and hostility into his songs so regularly that it was common to have lyrics which were prayer tracks themselves, and he could easily go from singing dark, hardcore pieces to gospels at the drop of a hat. He had a huge female fanbase among rappers for being a handsome Walking Shirtless Scene. With their raw content and themes of anguish and agony, his intensely emotional songs won millions of fans, many awards, and respect from famous musicians worldwide.

He occasionally acted, with his most high-profile acting role being Cradle 2 the Grave opposite Jet Li.

He loved dogs, his levels of obsession ranging from owning a succession of beloved pets to identifying as a dog himself, frequently barking and growling in his songs, and even eating dog food.

On April 2, 2021, Simmons, who had been candid about his battles with drug addiction, relapsed, and was hospitalized from an overdose-induced heart attack. He was reportedly in a vegetative state, and was placed on life support. After a week of his condition increasingly deteriorating, he died of multiple organ failure on April 9. He was 50.

X gon' deliver these tropes to ya: