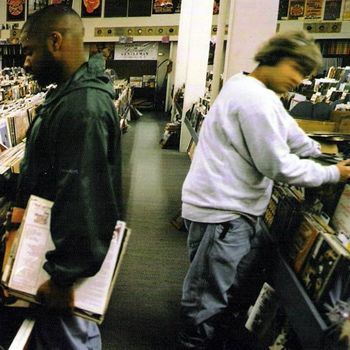 Bob Wood, national program director of the Chum Group, worked with us in producing...

Endtroducing..... is the debut album of American music producer DJ Shadow, released in November 1996 on the Mo' Wax label.

The album was made after a period where Shadow released three successful singles on the same label — "In/Flux", "Lost and Found (S.F.L.)", and "What Does Your Soul Look Like". In his words, Endtroducing was "the fourth and final chapter in a series of pieces...with a certain sound, a certain tone, a certain atmosphere". This inspired the album's name, as it marked the conclusion of Shadow's Mo' Wax series but served as his big debut.

Endtroducing is renowned for its revolutionarily liberal and eclectic use of sampling — everything from Björk to Metallica to Prince of Darkness to Twin Peaks to Giorgio Moroder gets a spin. While the public consensus shifts between "fully sample-based" and "almost fully sample-based", the album has received a Guinness World Record for being the "first completely sampled album".

To make the album, Shadow worked with an Akai MPC60 sampler, a Technics SL-1200 turntable, an Alesis ADAT tape recorder, and his extremely large collection of LPs (over 60,000). He found recurring aspects of the album to be genre variability between songs and a recurring concept of self-contemplation onset by his own bout with depression at the time of production.

The album was released to critical acclaim, being celebrated as one of the greatest albums of the year and the decade, and certainly a project with nigh-unparalleled staying power in the instrumental hip hop genre, as Shadow's innovative sampling techniques served to be highly influential to future generations of producers.

It is also seen as a landmark album in the genre of instrumental hip hop. The album was also included on TIME's list of 100 timeless and essential albums. It is compared with albums such as The Avalanches' Since I Left You since both are seen as crowning achievements of plunderphonics.

Unfortunately, in all of this acclaim, Endtroducing became a Tough Act to Follow that Shadow likely will never be able to top, as all of his future albums failed to receive the same unanimous praise and celebration as this one.

Building tropes with a grain of salt: