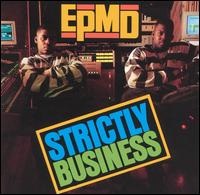 Coolin at a party, no, better yet, disco
Head feelin' mellow from a bottle of cisco
Move...(beat)... To crush and fry a sucker MC like Crisco — "I'm Housin'"

EPMD (Erick & Parrish Making Dollars) is a hip-hop duo from Brentwood, NY, that reached the peak of their fame in the late Eighties and early Nineties. The two are known for their laid-back style of rapping — provided by Erick "E-Double" Sermon's tenor and Parrish "PMD (Microphone Doctor)" Smith's baritone — which contrasted well with the louder, more hyper-sounding rap acts of the time. There have been a couple of breakups through the years, but EPMD are still active as of lately.

Tropes all up in their business: