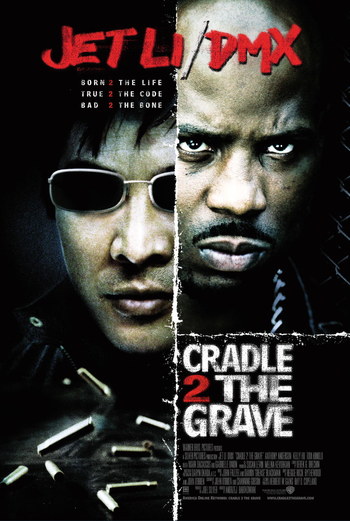 Cradle 2 the Grave is a 2003 action film directed by Andrzej Bartkowiak and starring Jet Li and DMX. Despite the title, it's not a sequel to anything.

The film opens with a gang of African American criminals composed of leader Anthony Fait (DMX) and his lackeys Daria (Gabrielle Union), Tommy (Anthony Anderson) and Miles (Drag-On) performing a diamond heist, with particular emphasis on some black diamonds that their employer, Christophe (Paolo Seganti), is after. Alas, Taiwanese Intelligence Agent Su (Li), who is after the diamonds himself for unknown reasons, busts them. Despite this, Anthony manages to escape with the diamonds and bring them to a fence, Archie (Tom Arnold), for them to be appraised. That night, Christophe is murdered by henchmen of the man he was working for, Yao Ling (Mark Dacascos). Ling also sends some henchmen after Anthony, in search of the diamonds. Anthony and Su meet each other and are able to repel these henchmen, but then Anthony learns that Ling has kidnapped his daughter, Vanessa, and won't release her until he gets the diamonds. They then find that gangsters under the command of jailed crime boss "Jump" Chambers (Chi McBride) came to Archie, who possessed them, and took them. Anthony and Su decide to team up to get the diamonds and Vanessa back, in addition to uncovering why Ling and Chambers want the diamonds in the first place.