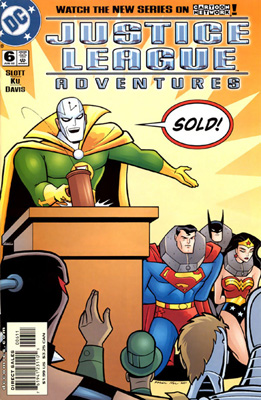 Twentyfivetwentyfivedoiheartwentyfive? Twentyfivefromthegentlemanintheback, doihearthirty?
Tucker: They're probably trying to steal the artifact, then sell it to the highest bidder.
Caboose: Oh, they're like evil eBay.
— Red vs. Blue
Advertisement:

Proof that Even Evil Has Standards, The Bad Guys will show some sport and allow for other baddies to meet underground and place bids on a Destructive Piece of Applied Phlebotinum or other significant Doomsday Devices. Or maybe he does it because he'd love to make some bucks.

Does not always involve the classic "English auction" (that's the "going once, going twice" sort), instead using sealed bids. It's more refined that way, and if the price is millions of dollars, it's easier to handle that way.

Since slave-taking is a form of villainy, a slave auction would also fall under this trope. This is more Truth in Television than many other examples, though, as most slave societies (e.g. the United States, before the Emancipation Proclamation) did commonly sell their slaves at auctions. This may be the heroes themselves being put up for auction, often for the right of the highest bidder to slice them up, or it may be someone or something important to the heroes that's on the block. In this case, the good guys may go undercover to make a bid themselves, but this gambit rarely turns out well. Often, especially in pornographic works such as Hentai, the slaves are Sex Slaves.

A form of Villains Out Shopping, although it can (and usually does) have more plot significance than most.