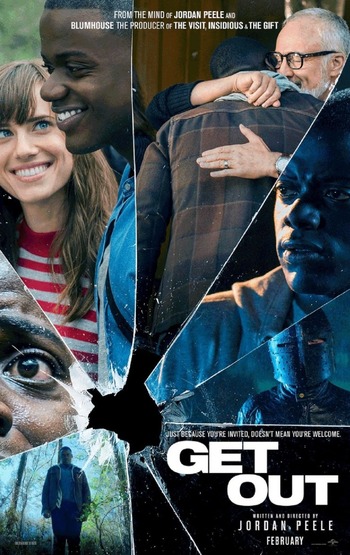 Do you belong in this neighborhood?
"All I know is sometimes if there's too many white people, I get nervous, you know?"
— Chris
Advertisement:

Chris Washington (Kaluuya) travels with his girlfriend, Rose Armitage (Williams), to the upstate New York estate of her parents, Missy (Catherine Keener) and Dean (Bradley Whitford), to meet them for the first time. Already anxious that her wealthy, white parents will not accept him, Chris notices certain oddities about the idyllic property... such as the unusually docile black household servants, and how the Armitages and their friends seem to take an oddly urgent shine to him.

When one of the family's friends seems to snap and tells Chris to get out, he stumbles onto a strange conspiracy, and finds that getting out is much harder than it seems…

If you're looking for the titular trope itself, look here.

Alternative Title(s): Get Out