Black Is Bigger in Bed 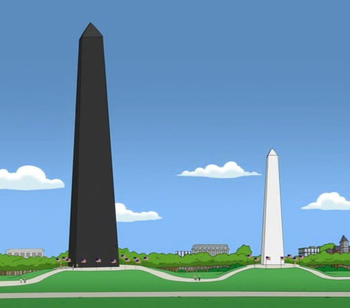 Pictured R-L: the Washington monument and the Obama monument.
White She-Devil: Once you've had Undercover Brother, there is no other.
Conspiracy Brother: Naw. It's "once you go black, you don't go back."
— Undercover Brother
Advertisement:

A very prevalent notion in modern society is the idea that black men are better endowed than other races. Even if penis size never explicitly comes up, one might still see references to the idea that black men are automatically good lovers. The stereotype is a very old one, likely dating back centuries. While it may initially seem like flattering depiction, it has had some Unfortunate Implications and derives from quite a checkered past.

Since the colonial era, there has been the idea of a well-endowed, sturdily built, and rather libidinous black man. Until the late 20th century, it was commonly accepted that black men made no effort to control their sex drives, and, in some time periods and regions, a lot of nasty stuff was done to black males on the paper-thin excuse that they had posed a sexual threat to someone, often white women. (Needless to say, very little was ever offered — or required — in proof of any of these allegations.)

The stereotype of black men as inherently oversexed is, at its root, dehumanizing. These are not rational creatures like white men, it claims; these are mere animals whose sexual functions operate mechanically and instinctively like a bull in rut. Picking up on an idea found in classical Greek culture,note Unlike modern Western conceptions, the ideal Hellenic man had a modest-sized or even small penis, to show his focus on intellect rather than sexual drives. Also unlike the modern trope about black men, the Greeks thought this about everyone who wasn't Greek, not just Africans. The Romans, who were by their own admission a less intellectual culture than Greece, were particular targets of the "big-penis" form of Hellenic derision ("Look at Julius with his big cock! Sure, he runs the empire, but he can't think."). it saddled the stereotypical black man with a comically-oversized phallus, just to show everyone what's really running the show. White women were also warned that too much unsupervised contact with a black man (up to and especially including sexual intercourse) would leave them Defiled Forever; and heaven help the mother of a Chocolate Baby...

As for black women, they too were defined in terms of their sexual urges — early psychologists (who'd invented the term "drapetomania" in order to frame black slaves' desire to be free as a form of mental illness) would occasionally "justify" white overseers and plantation owners' rape of slave women with the claim that black women were "hot" and therefore needed their masters' sexual control. Also like black men, this perception extended to bodily sterotypes, with black women being depicted with oversized breasts and rears, something that particularly took off in the wake of Khoikhoi woman Sarah Baartman's popularity as a freak show attraction during the 19th century.

To make a long story short, this trope has some extremely dubious origins, and continues to carry all manner of Unfortunate Implications with it. Human sexuality being what it is, the controversy surrounding this trope has only made it more forbidden and thus, fetishized. You Have Been Warned.

Obviously a subtrope of Bigger Is Better in Bed. Also compare Where da White Women At? and Race Fetish.