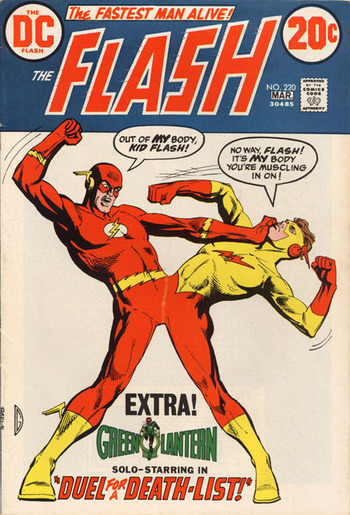 "May they always work together." - Iris West
O'Malley: Shut up, get out of my head!
Doc: Technically it's my head. But I don't mind sharing. Don't you remember that talk we had about sharing?
O'Malley: Shut up!
— Red vs. Blue
Advertisement:

As a result of Functional Magic, Applied Phlebotinum, or something else, two characters end up sharing a body. This is distinct from Puppeteer Parasite and most cases of Demonic Possession in that the two characters are more or less equal partners here. The one whose body it is may claim seniority, but enforcing it is a different matter.

Bonus points if the characters in question are diametrically opposed or just don't like each other much, in which case it becomes a form of Chained Heat. This can also be quite interesting if the two sharing a body are of opposite genders.

May resemble Split Personality, but usually happens to characters who have already been well established separately and is almost always a temporary situation. If the characters battle for control of the body, this can share some features with Enemy Within; the key difference is that Enemy Within originates within its host, while the character sharing a body does not. Sometimes The Mirror Shows Your True Self, revealing the extra driver. Compare Two Beings, One Body, when two beings are physically combined. Also compare Symbiotic Possession.