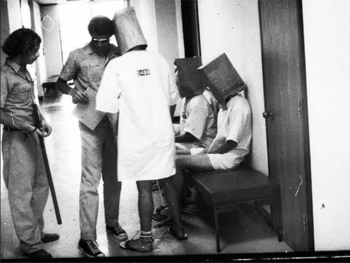 The Stanford Prison Experiment is an infamous psych experiment performed in 1971 by Philip Zimbardo where volunteers were split into groups of "guards" and "prisoners". While both sides knew it was fake, they quickly began treating it as though it was real, with both groups spontaneously falling into their "roles". The "guards" (and researchers) quickly became abusive and sadistic, while the "prisoners" attempted to riot and showed symptoms associated with long-term incarceration.

Eventually, when Christina Maslach, a graduate student asked to conduct interviews with the test subjects, objected to the appalling conditions of the experiment (Zimbardo would later notice that out of the 50 people who had observed the experiment, Maslach had been the only one who initially questioned the morality of it), Zimbardo realized that not only had the situation begun to spin rapidly out of control, he himself had also unintentionally assumed a role of his own and was starting to act more as a warden than a researcher, leading him to decide that the experiment had to be stopped. And so the entire experiment was shut down after six days (it was originally planned to last two weeks), and is often used as an example of psychological research that cannot be repeated due to ethical concerns.

While many people know of the experiment, few realize how little it proves. The experiment was tainted by a combination of selection bias, insufficient controls, a small sample population, various methodological flaws, and not noting the personalities of guards before the experiment began (there was no attempt to discern if an evil guard was always sadistic, or only became sadistic during the experiment). Zimbardo dedicated much of his career to the promotion of the idea that bad environments drive bad behavior, and it's no coincidence that this study proved exactly that.

This scenario plays out on many reality TV shows. People in a staged environment start acting as though it were real, usually with dramatic changes in personality.

It is also an easily recognized plot premise for any kind of storytelling.

See also: What You Are in the Dark, Becoming the Mask, A Darker Me and Beneath the Mask