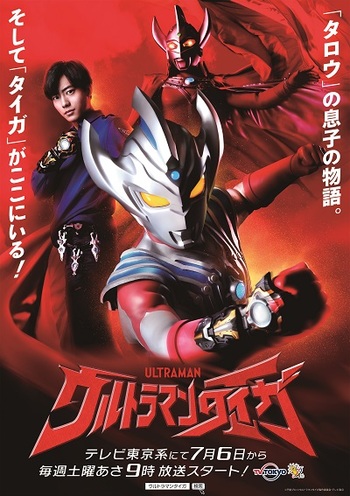 "The story of the Son of Taro. And here before us stands Taiga!"
"Let's go, partner! Buddy Go!"
— Tagline
Advertisement:

Ultraman Taiga is a 2019 tokusatsu series created by Tsuburaya Productions and the 31st entry in the Ultra Series. While this show is officially the first entry of the Ultra Series in the Reiwa Era, it is still counted as part of the New Generation Heroes trend that started from Ultraman Ginga.

Long ago, the son of Ultraman Taro named Taiga had saved Earth from an unknown catastrophe and merged with a young boy named Hiroyuki Kudo, remaining dormant ever since. Years later, the boy grows up to join E.G.I.S. (Enterprise of Guard and Investigation Services), a private security organization tasked in handling alien-related cases. Unbeknownst to him, Hiroyuki carries Ultraman Taiga’s “particle of light”. The new story begins as Taiga's powers revive from Hiroyuki's body, and later the boy bonded with two more Ultras of different origin. Meanwhile, Ultraman Tregear returns from Ultraman R/B the Movie as the major Big Bad.

Starting with September 29, 2019, Ultraman Taiga coincided its airing with the YouTube-exclusive miniseries Ultra Galaxy Fight: New Generation Heroes, the latter is a prequel to the former itself.