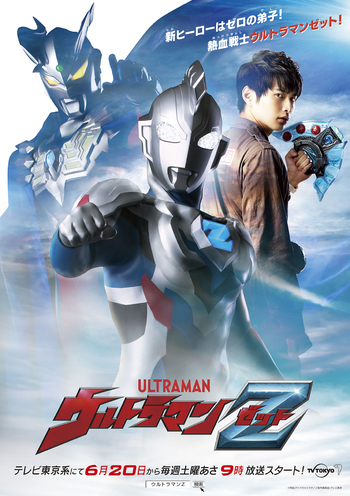 "I ask that you chant my name! Ultraman Z!!"

Ultraman Z is a Tokusatsu show in the Ultra Series that premiered June 20, 2020 on TV Tokyo. It is currently being simulcast on Tsuburaya Production's official Youtube channel

with English subtitles. The series is also the eighth entry to the New Generation Hero era that started from Ultraman Ginga, and it's also meant to celebrate the 10th anniversary of Ultraman Zero.

Ultraman Z (pronounced "Zett") is a plucky young fighter from the Land of Light who dreamed of following in the footsteps of his idol, the famous hero Ultraman Zero. To pursue this goal, Z joined the Inter-Galactic Defense Force and began training under Zero as his apprentice. However, while investigating a plot to spread evil powers known as "Devil Splinters" across the universe, Z is separated from Zero and follows the trail alone to Earth.

Once on Earth, Z has a fateful encounter with a hot-blooded pilot named Haruki Natsukawa. Haruki is a member of "STORAGE" (Special Tactical Operations Regimental Airborne and Ground Equipment), a division of an elite international task force which uses giant robots to resolve monster-related threats to the peace and security of Earth. With the aid of the "Ultra Z-Riser" and the "Ultra Medals", which channel and fuse the powers of great Ultraman heroes, Haruki and Z unite as one to defend the world.

Like the previous entry Ultraman Taiga, Ultraman Z also had its prequel series, the Ultra Galaxy Fight: The Absolute Conspiracy, which also feature Ultraman Z himself as one of the participating heroes.

A manga adaptation, Fight! Sevenger is in the works focusing on the exploits of STORAGE and Sevenger before Ultraman Z arrived on Earth.

A spin-off mini-series Sevenger Fight was announced in March 17th, 2021 consisting entirely of mini-episodes depicting Sevenger and Ultraman Z facing off against many Ultra Series monsters and aliens (in the style of the old Ultra Fight shows). It will debut in Tsuburaya's new streaming service "Tsuburaya Imagination".